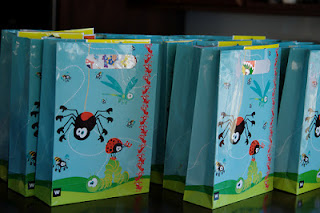 Party bags, it might be fair to say, are fun for the children receiving them but less appealing to their parents. The contents tend to be plastic toys that don't last long and add to general toy clutter at home, and some sweet treats.

We've been to a couple of third birthday parties in recent weeks and instead of a party bag, my son was given a book to take home. What a great idea!

At one party each child was given a copy of the same book. It was a big hardback book, party themed with a story inside but also with fun recipes to make. At another party, there was a selection of story books on a table by the door for the child and parent to choose from as they left. In both cases, we came home with a nice new book that can be enjoyed together and that has more lasting value and appeal than most common party bag contents.

I have given little books in party bags before but really like this idea of giving one good book to each child who attends the birthday party. I agree, it may have less excitement for the toddler than, 'what's inside my party bag?!' but in the long term, where plastic toys from a party bag might get broken or mysteriously disappear ;-), the book is something that can be read and re-read and enjoyed for longer.

At another party my son was given a cute pot plant to take home instead of a party bag. This was a really nice idea too and the thought that the child can water and nurture their plant is a sweet one. However, maybe because I am not a green-fingered person, the plant idea is not one I would do personally.

What do you think about the book idea? Do you have any party bag thoughts to add or any other alternatives your child has received?
---
photo credit
Posted by Mummy Zen at 08:30

Thank you for reading. I'd love to have your comments and thoughts!